If I shared Neal’s report card and just left it at that it would be prideful, but I share his grades because of the story that goes along with it. I pray his story inspires you.

Some of you may remember that Neal went into the hospital on August 24, 2019, just before he was supposed to start his first semester at Princeton Seminary. He was admitted into the hospital in unbearable pain in his gut and several other symptoms. They finally discovered that he had salmonella poisoning that had gone into his bloodstream. Literally his entire body was infected. On top of that he had a suppressed immune system due to some meds and he has also dealt with ulcerative colitis since he was 15. 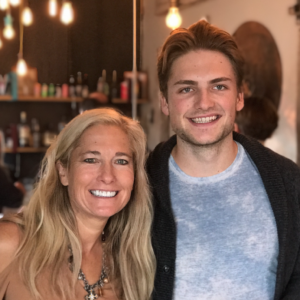 We saw doctors from 3 different departments in the hospital and they all were working hard to heal him. As each day passed it got closer and closer to when he was supposed to head off to Princeton. If you’re a mom (or dad) I think you will feel my pain. To see a long term dream being possibly stripped away from your child is soooo sad. Neal knew for quite a long time that he wanted to go to seminary. When he was accepted into Princeton (voted the #1 seminary) he was beyond excited. The day Neal was supposed to fly out to Princeton my tears were flowing because instead of flying off to start this exciting chapter, he was lying in a hospital bed so miserable.

Princeton had given him a deadline - if he wasn’t able to be there by Sept 6 (his birthday) he would need to wait and maybe start the following semester. Neal finally took a turn for the better and although he was super week and had lost 22 pounds in 8 days he was finally released. Neal was so week but he insisted that he could go. My husband had to go to Princeton and stay with him for 8 days. He fed him, got him to class and cared for him. For several weeks Neal had to fight to just get to each class and get the work done. The fact that he got all A’s at Princeton is an incredible accomplishment, but that he did this with so many things against him speaks into his “I’m not giving up” attitude.

Here’s why I am sharing all this. When Neal was at the airport with my husband ,about to board the plane, still so sick he almost could barely walk thought the airport, he called me. His voice was weak and I was shocked by what he said, “Mom, I saw a job posting for a fitness instructor at Princeton and I just applied.” Here he was so sick but he already believed he would be better. Not only just a little better but healthy enough to teach fitness classes. He claimed healing, before it happened. Our thoughts are so important!

Neal could have played the victim and not applied for that job. He could have allowed his challenging start at school to give him a ticket to skip classes and not give it his all. He didn’t. He chose to fight hard and to give his 100%.

What do you feel called to do? Does it seem like things are stacked against you and it’s just too hard to push through? Can you right now change your thoughts and believe in your heart, “I can do all things through Christ who strengthens me” (Phil 4:13) or how about starting each day shouting out with conviction, “Nothing’s impossible with God”

What about if you prayed and then put together the next 3 steps you can do to make your goal a reality. Can you write down the typical obstacles that have pushed you off course in the past? Now, write down what you can do to make sure those obstacles don’t derail you this time. We often blame others or situations outside our control, but forget about the things you can’t change. What can YOU do with GOD’s help so you move towards what you know you are called to do.

I am SO happy to say Neal’s health is the best it’s been in 8 years and he’s thriving at Princeton. He uses incredible discipline in the way he cares for his body, he studies for hours most days AND he knows that if God is calling him to finish seminary then God will equip him to finish this. I love this kid with every cell in my body and am so proud of him.

I pray Neal’s story inspires you.

10 Simple Steps To A Lifetime Of Better Physica...

5 Reasons Why A Retreat Is A Worthy Investment

Finding Comfort In Jesus, Not Food